Joe Atkinson Permaculture
For me, the project relates to the permaculture ethics in important ways:
* While many international permaculture teachers already offer teacher training to build up local capacity, this project hopes to accelerate the process.
** There will always be a place for international teaching and cross-fertilization of practice and ideas, but the aim is to reduce the level of dependency on foreign teachers that currently exists in many European countries.

For more information about the partnership, visit permateachers.eu

Here is my first attempt at a write-up of the EPT. It can't hope to fully capture the rich, diverse and nuanced learning experience that the project was, but hopefully provides a useful narrative and explains how permaculture ethics, principles and tools were used throughout the project.

This section includes a small selection of outputs from the project to give a flavour of what was produced. The main project website contains a much more extensive collection of resources and materials that were created.

Below is the brochure that was produced to explain the project to others: one of the key outputs of the project...

Download File
The 'Teachers' Manual' that we produced took the form of a collection of online resources. It included a series of microteaches that were filmed and shared via the website. Here's me delivering a session on input-output analysis based on the one found in the Permaculture Teachers' Guide.
Mihail Kossev filmed this footage of the Portugal meeting to capture something of the atmosphere of the partnership... 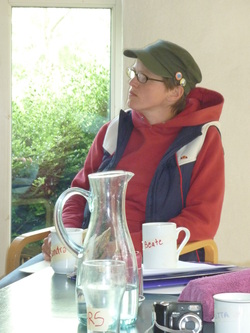 During the course, it became apparent that many permaculture teachers in Europe were operating with limited support networks. This meant that there were few opportunities for cross-fertilization of ideas, sharing of teaching methods and best practice, and there was scant capacity or resource to enable new groups to develop their educational systems. Also, working in relative isolation meant that many permaculture teachers in Europe were at risk of becoming burnt out or just discouraged.

During a day off from the course, the group visited a nearby organic garden project. On the way back, Sandra and I sat together on the bus and idly talked about how it would be good to meet up again in the future: to hold a teachers' meeting in Europe, like the ones I'd recently been organising in Britain, to continue the sharing & exchange. 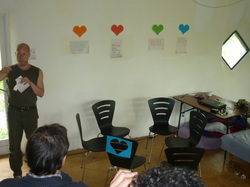 Lars Keller facilitating the open space session
At the end of the course, there was an open space sesson to explore what students might do next. I proposed the topic of a European teachers' skill-sharing and networking meeting the following year.

A few of us discussed it, and Sandra and I stayed in touch after the course and agreed to hold it at Sieben Linden Ecovillage in Germany the following year.

I attended the European convergence in Belgium and held a workshop where I conducted a survey of participants to establish what should be on the agenda for the teachers' meeting the following year.

I also met permaculture teachers and activists from across Europe who would later join the partnership, including Antonio Scotti from Spain and Leo Bakx from the Netherlands. 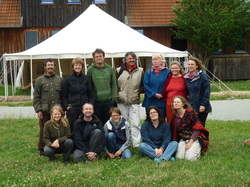 At this meeting, we discussed the idea of seeking funding from the European Union's Lifelong Learning Programme (LLP), for a series of meetings between a partnership of European permaculture organisations, to share good teaching practice, exchange about curricula, education systems etc.

At the time, Kipper (Jan Fischer) was involved in a LLP partnership between the German Permaculture Institute, Global Ecovillage Network, Transition Network, Cultivate, Findhorn and others. He brought insight into the possibilities and experience about how to approach the funding application.

The participants at this meeting agreed that we should follow up the partnership idea. Sandra, Kipper and I took away actions to set it in motion. 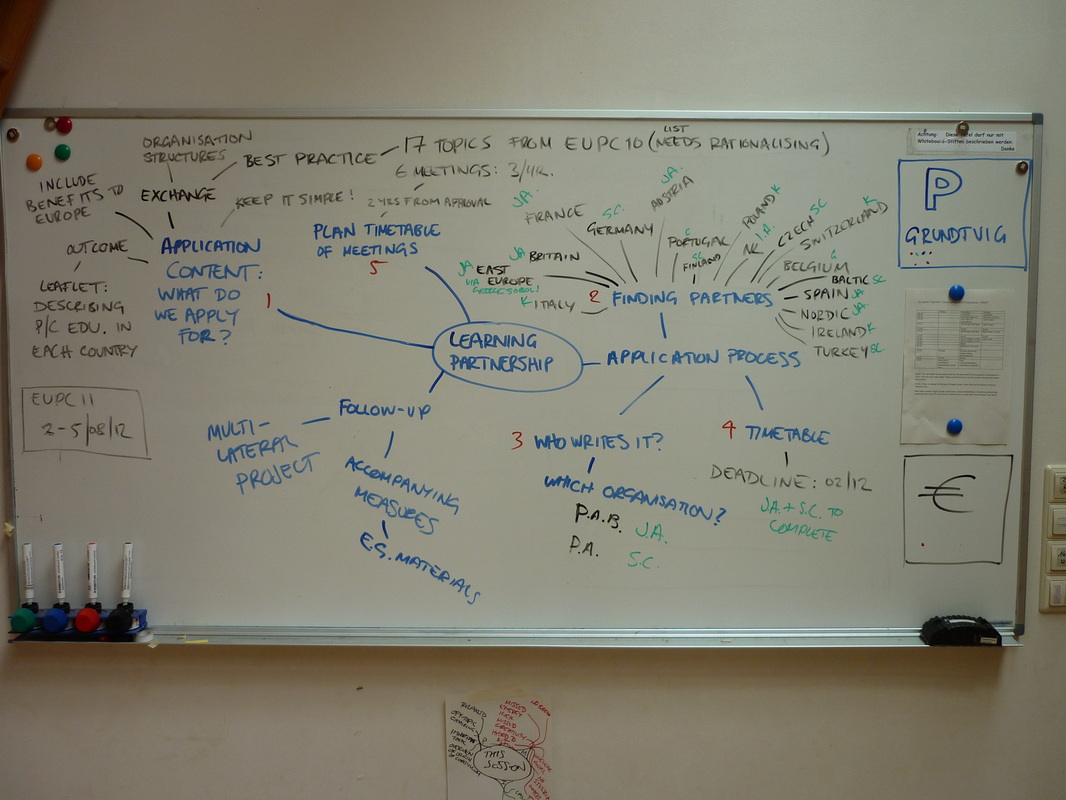 Sketching out the plan of action

After the Sieben Linden meeting we contacted various people in the European permaculture network: people who had been on the Denmark course, attendees at the European convergence, existing contacts etc, to see if anyone would be interested in joining the partnership. The response was overwhelmingly positive, so we invited people to help write the application.

The partnership grew through online collaboration over the autumn of 2011, and we started to put more detail into the project aims & objectives. I took on liaison with the funder via the UK's national LLP agency. This involved attending information days, submitting a draft proposal, taking feedback, re-writing it, collating 14 countries' input etc. This all helped to inform both the design of the project and development of an application that stood a good chance of being approved.

The objectives we set ourselves were:


Several meetings, skype calls and emails later, we completed the final, 90+ page application and submitted it to our respective national LLP agencies in January 2012.

In June we received the news that of the 14 countries that applied, 12 were awarded the funding; the total grant was around 220,000 euros.

The meeting was partly a getting-to-know-you exercise, partly an introduction to the concept of the partnership, and largely a planning exercise. We designed our organisational structure (using the Viable Systems Model as an organising principle) and mapped out the agenda for the next 6 meetings, to ensure that the partnership objectives would be met. 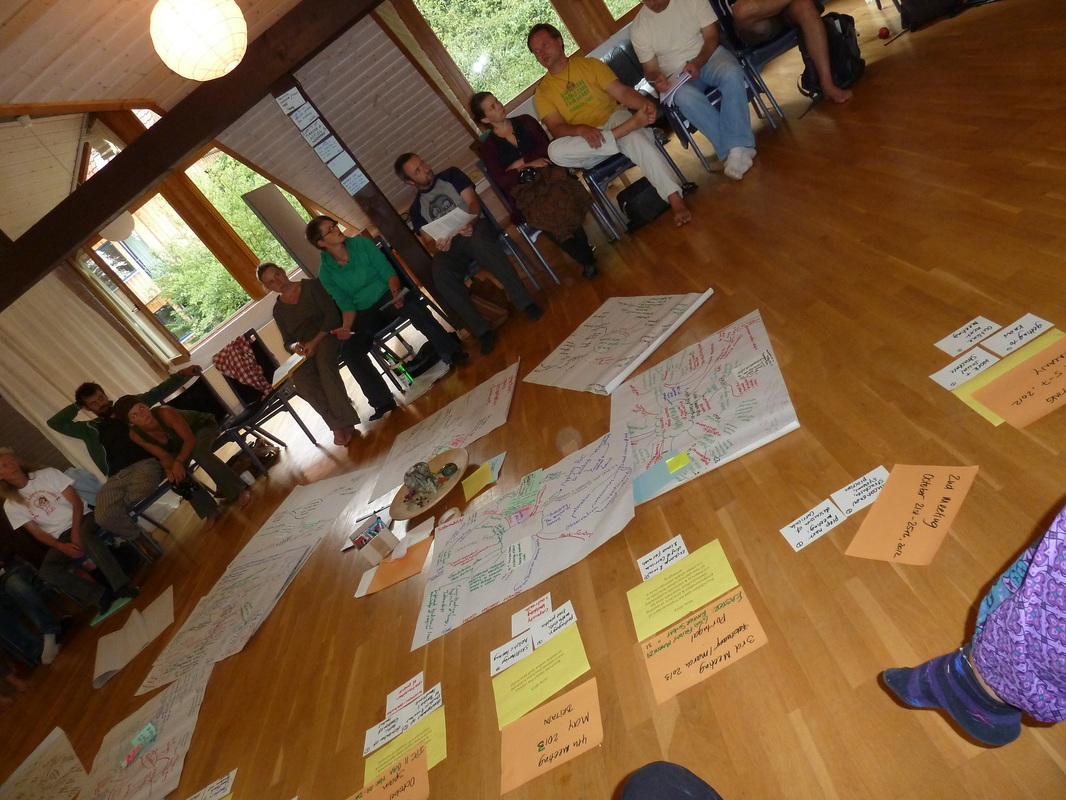 Opening meeting of the Partnership: designing our organisational structure and planning the rest of the project in detail 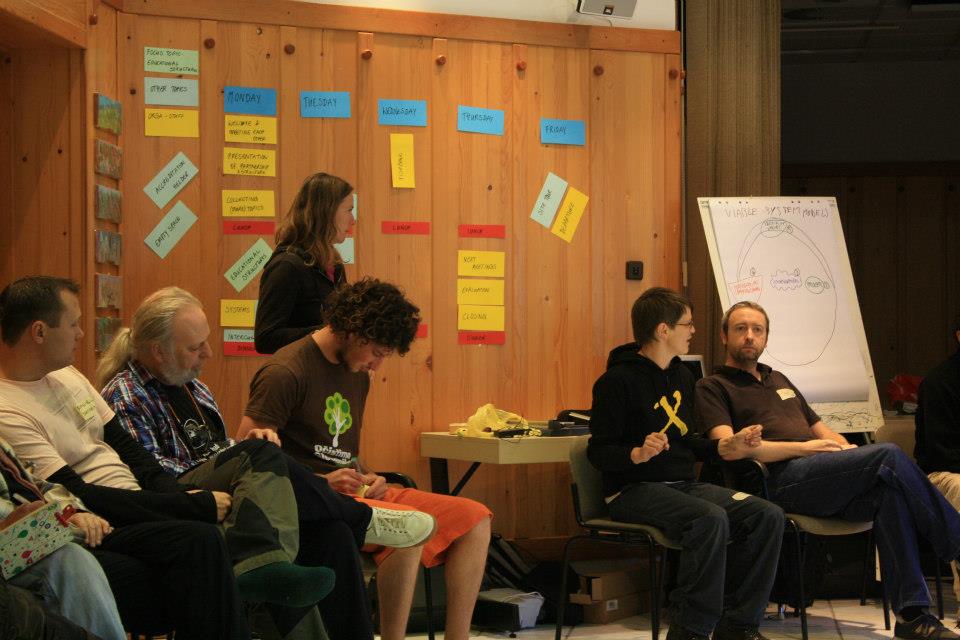 The Portugal meeting focused on exchange about content & curricula. It was also the meeting where feedback about our organisational structure and processes started to emerge. This led to a lot of discussion, proposals to change the way we worked, some conflict and frustration.

The extent and profundity of the diversity in the group became apparent to me at this point. After reflecting on this meeting I realised that, while the partners had signed up to a shared set of aims and objectives, there were some very different starting positions and underlying assumptions about the partnership that I had not previously been aware of.

My main learning from Portugal was the importance of going slowly when working with groups. Building consensus is critical to the long term success of group projects, and everyone must have a voice.

Here is a short film made by Mihail Kossev at the Portugal meeting. It introduces some participants in the partnership, in their own words.

The focus of the UK meeting was on sharing teaching methods. We held a creative teaching methods masterclass, led by Looby Macnamara the weekend before the meeting, and took the group to visit 2 LAND centres: Edibles and Offshoots afterwards. 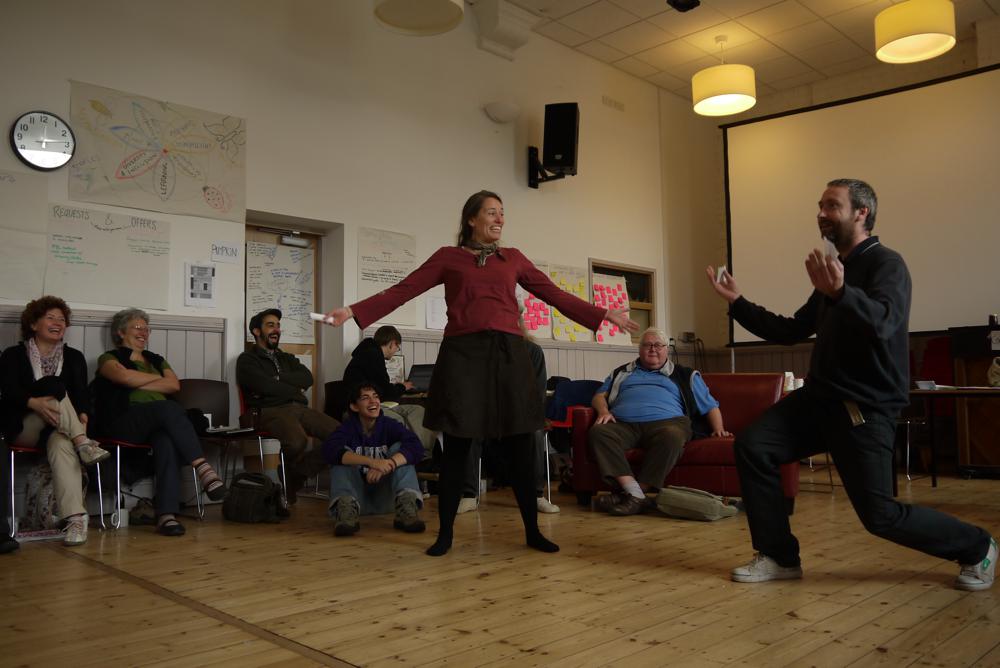 Experimenting with methods from the Theatre of the Oppressed 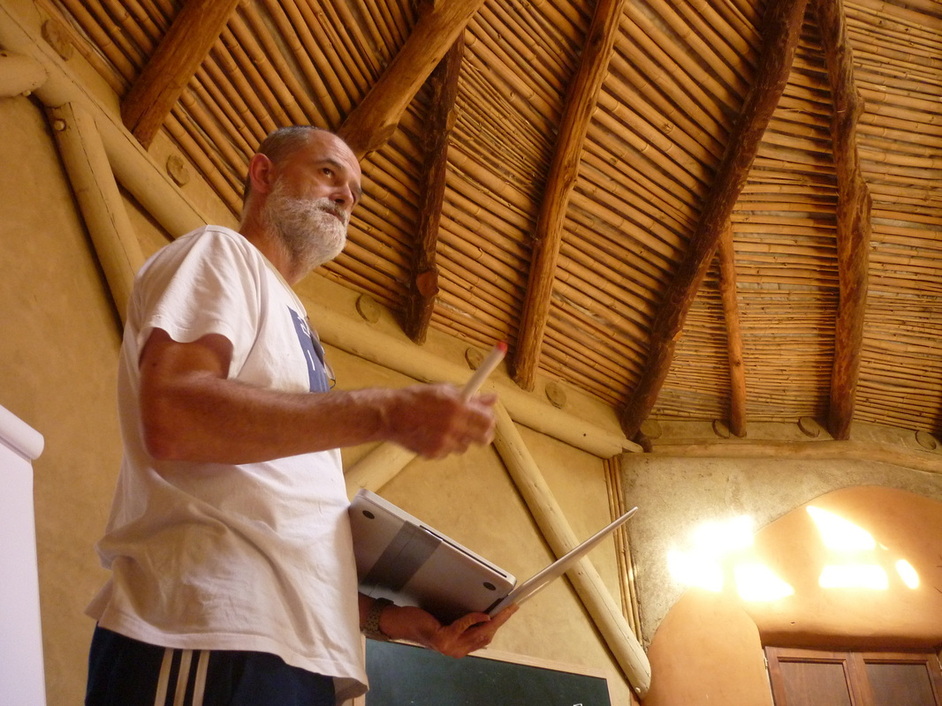 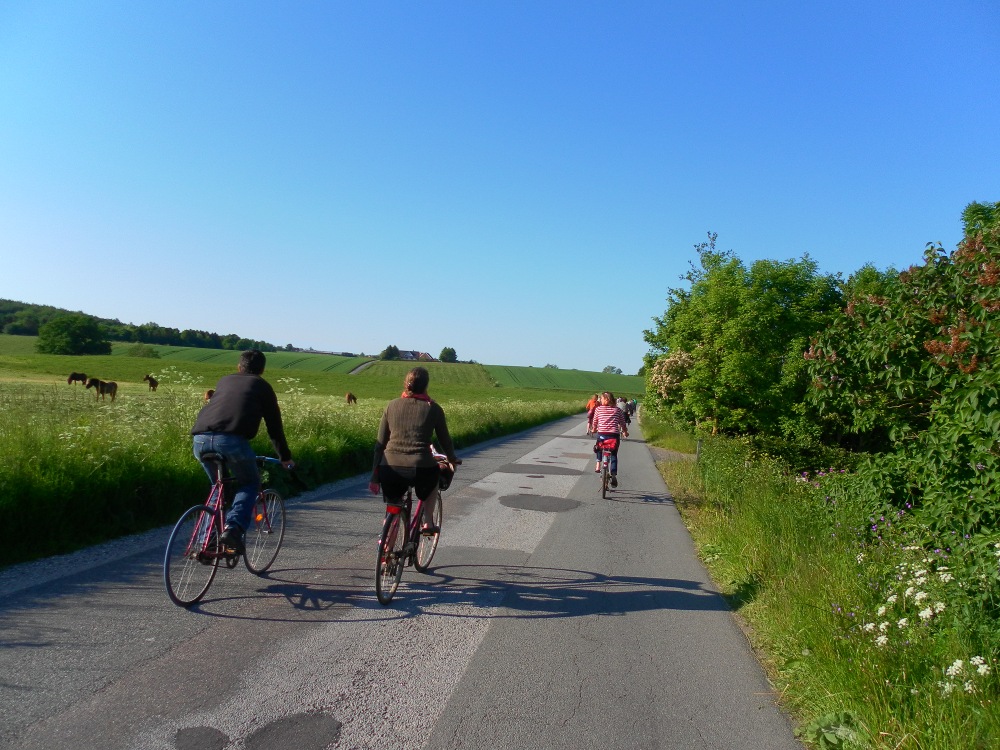 Participants present the website, low tech style.
This was the final meeting of the partnership - during the funded phase. It focused on celebrating or achievements, evaluating what we'd done, and planning how we might go forward. We left with some tangible next steps and dates in the diary for future meetings, such as the IPC-UK in 2015, EUPC in Italy in 2016, EUPC Netherlands 2018...