I've completed several other taught courses while working towards the diploma. Here's a brief description of each course and how it relates to my diploma.

I was part-way through the MSc at CAT when I took the Permaculture Design Certificate course. After completing the PDC I completed the taught modules of the MSc and then took a break before writing my thesis.

My original thesis idea was to carry out a comparative study between standard disaster recovery responses and permaculture responses. In particular I planned to compare and contrast the impact of the Green Hand Field School permaculture centre in Aceh with other international NGO responses to the 2004 Tsunami. I was interested in this area as I had become involved in a student-staff project that established a new charity, Reset Development. Resst sought to develop practical sustainability skills in the aid & development sector.

However, over time I moved away from this idea; I didn't feel that I could justify the carbon emissions associated with flying to Indonesia and foresaw a number of practical and financial challenges relating to the project. Also, on a more fundamental level, the permaculture course, and David Holmgren's "Principles & Pathways Beyond Sustainability" had invited me to critically evaluate the value of a course that was so firmly rooted in reductionist, science-based thinking and I wanted to reflect on it all before pressing ahead.

After some time out I decided that I did want to finish the MSc and was still interested in using my research in a way that would be beneficial or useful to permaculture. By now, I had been working at the Permaculture Association for a short time and had discovered how many permaculture groups were struggling to obtain planning permission for their projects. The coalition government had recently come to power and published a range of proposals for overhauling the planning system. I became interested in how these proposals might affect permaculture groups, so decided to explore this for my thesis. See below.

My thesis formed the basis of the Permaculture Association's response to the Government's consultation on the National Planning Policy Framework, which I wrote. See below.

After completing the PDC I wanted to develop my understanding of horticulture and botany. I took the RHS Level 2 and passed with a commendation. Design 1: "A productive garden" was part of the homework for this course.

Explaining how to sharpen the scythe
I'd started work as the Learning Coordinator at the Permaculture Association in APril 2009. This role involved supporting the permaculture teaching community, so I wanted to gain a better understanding of how permaculture is taught, meet some key players in UK permaculture teaching, and start on the path to developing another income stream (freelance teaching).

So, this was intended as a multifunctional course from the start. What I hadn't necessarily planned for was how much fun it turned out to be, how much confidence as a teacher it would give me, or how many friends I'd make during the course. So, I came away having obtained a number of yields - some planned, some not, but all really positive. 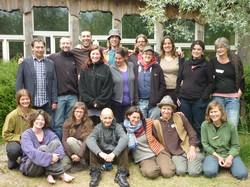 In late 2009, Andy Goldring forwarded an interesting email to me advertising this fully-funded international permaculture educators' course in Denmark. I thought "wow, that would be a great opportunity for someone in the network", I'll put it on the website when I get a chance. Andy suggested that I should go on it. So I did.

I didn't realise it at the time, but this was to be the start of the European Permaculture Teachers' Partnership project - a quarter of a million euro project involving teachers from more than 15 countries - that developed over the next few years.

PTLLS: Preparing to Teach in the Lifelong Learning Sector 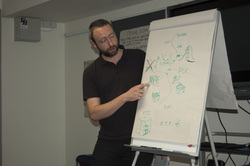 Describing my "river of life"
This course was another run of Designed Visions' ToT that I had been on in June 2009. This was the first time they were running the course with an integrated PTLLS qualification, which I needed.

I arranged to act as an apprentice teacher on this course, with the sessions I delivered on the course doubling up as my observed teaching for the PTLLS. Doing this also stacked in additional functions of understanding PTLLS and accreditation mechanisms, which I needed to know for my role at the Association.